Google had been testing this change since July 2021. The new look affects desktop users only.

Here’s a before and after look at the Local Pack for the search results for “Denver Personal Injury Lawyer”:

In early December, many law firms noticed a ranking change in their Local Search results when they gained or lost visibility. The change was made worldwide and affected all types of businesses. More specifically, businesses impacted would have noticed a change between December 1 – December 8, 2021.

According to a tweet by Google, the algorithm update “involved a re-balancing of various factors we consider in generating local search results”.

In general, we feel that Google’s changes were minor. From our observations it is possible that Google may have made the following changes:

The image below has two screenshots from LocalFalcon local rank tracker and shows where an accident lawyer ranks in the 3 pack in Milwaukee Wisconsin based on a user’s location. This specific firm lost a little visibility but still ranks fairly well. Many of the Local Search results have looked similar to this – a bit random. In this case, the law firm is indeed using “Accident and Injury Lawyer” in the title of their business, and as mentioned above, Google may be placing less weight on the business name. If that’s the case, you could see why they have lost some placement. It should also be noted that some people think user proximity weighting has been adjusted. In the case below, either (or both) explanations would explain the loss of visibility. 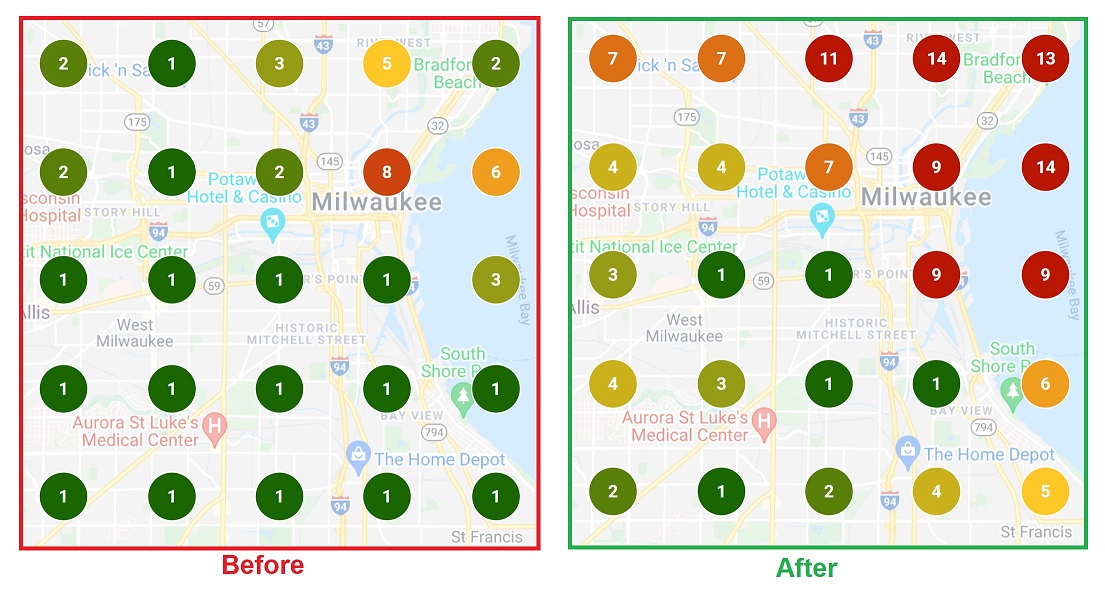 Do You Need Help Getting Cases from Local Search?

Law firms we work with still get excellent leads from Local Search.

Showing up in Local Search results in multiple new cases each and every month. If you need assistance showing up in the Three Pack or Google Maps, give us a call and we’ll be happy to take a look at what your Internet presence. We work with everyone from solo operations to larger international firms.