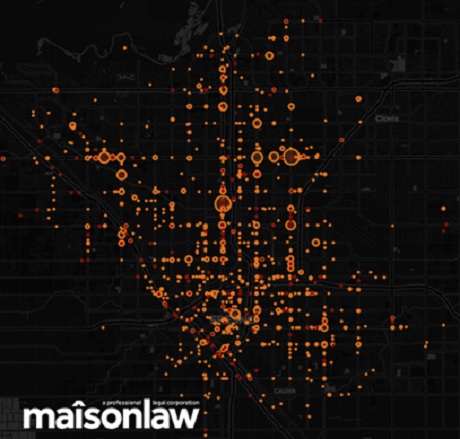 In response to the staggering number of pedestrians killed every year in Fresno, Maison Law engaged OptimizeMyFirm to create an in-depth study of pedestrian injuries and fatalities.

We used California’s Statewide Integrated Traffic Records System (SWITRS) to collect data on each pedestrian-related accident that took place in Fresno from 2008-2018.

Our data scientist analyzed the results and produced detailed charts and graphs to present the findings. One of the most interesting visuals from the study is an interactive map that plots the locations of each pedestrian accident.

After the study was complete, the findings were posted to Maison Law’s website, as well as an analysis of why these roads are potentially dangerous and how to improve safety measures for pedestrians.

We then reached out to local Fresno journalists and reporters to share the study the information. Several reporters responded with enthusiastic interest, some of whom noted that they would conduct additional outreach to local authorities to gain more insight as to why these locations are particularly dangerous.

Additionally, we issued a press release to widely publicize the study in California and other states in the region.

To see the complete study, graphics and analysis of the deadliest roads and intersections in Fresno, visit the Maison Law Pedestrian Safety Study page.